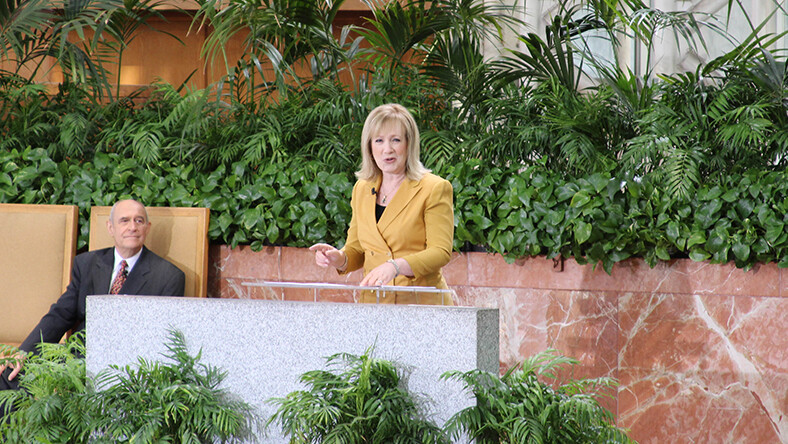 Author Kay Warren delivered a sermon on choosing joy at the Crystal Cathedral during two Sunday worship services that were taped for the Garden Grove church's "Hour of Power" TV broadcast.

Warren told the congregation about her own struggles to find joy even when the Bible clearly states a Christian's life should be full of joy.

"Honestly, I've struggled with low level depression for most of my life. So the idea of joy doesn't come so naturally to me," she said. "I began to wonder if 'joy' wasn't something that was just supposed to remain between the pages of the Bible – that it didn't really have that much to say in my life."

Her search for answers to finding joy in her life led to her teaching a Bible study at Saddleback also available online, Warren recently told The Christian Post. During the study she realized that the subject of finding joy had "obviously hit a nerve, and I realized I wasn't the only one that was struggling."

"We get confused over what's the difference between happiness and joy," Warren told the several hundred in attendance at the Crystal Cathedral. "We tend to use those interchangeably, but they are not at all my brothers and sisters. Happiness is all about what's happening externally."

Finding joy, she said, is about "connecting the internal to the eternal."

"I think joy is the subtle assurance that God is in control of the details of my life. It's a quiet confidence in God and it's a determined choice to give my praise to God," she explained. "I believe to the depth of my being that God is the only true source of joy for me."

Warren is also known as a tireless advocate for people living with HIV&AIDS and the co-founder of Saddleback Church. She has survived two bouts with cancer.

"Like following two parallel rails on a railroad track, the journey of life includes both joy and sorrow running inseparably," Warren writes in her book. "To focus on joy is a choice. Joy is more than a feeling. It starts with a new way of thinking that changes how we respond to trials in our lives."

Warren's appearance at Crystal Cathedral comes during a transitional period for the church.

The Rev. Robert H. Schuller, who founded the ministry in 1955, and his wife resigned from the ministry's board on March 10, citing disputes over substantial monetary and intellectual property-related claims. Immediately afterward, Sheila Schuller Coleman, the church's senior pastor at the time, announced she was walking away with some members of Crystal Cathedral to form a new church, Hope Center of Christ.

Dr. Lawrence Wilkes, who introduced Warren during the service, serves as the church's interim pastor.

In the wake of the shake-up, Crystal Cathedral Ministries, now led by CEO John Charles, has been trying to conduct church business as usual. Guest speakers with a message of hope through Jesus have been a trademark for the church.

"Joy is one of the chief blessings of the Christian life," said Charles, in a statement released last week. "Our congregation in California and viewing audience around the world will be blessed by hearing Kay teach about it."

The popular "Hour of Power" televised ministry program, which has been on the air since 1970, recently began airing a shortened, 30-minute version, for the first time on various stations. The traditional 60-minute version airs on the Trinity Broadcasting Network. The shorter version includes the entire sermon and a few minutes of worship through music.

Sunday's worship service including Warren's message is scheduled for broadcast the weekend of May 12-13.