Health and Wealth Will Ruin You, but So Will Following Jesus 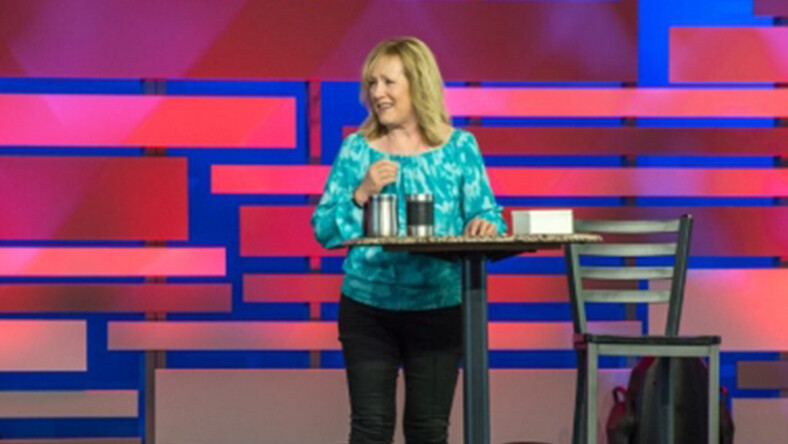 Following yesterday's candid discussion with Rick and Kay Warren about their journey of grief in the year following the death of their son, Matthew, Kay took to the stage at the Royal Albert Hall to share her thoughts on what it takes to be a true disciple of Jesus.

"In the aftermath of our son's death, our lives turned completely upside down," she shared on the second day of the HTB Leadership Conference in London.

"In the process I've had to look at every part of my life - my faith, my marriage, my ministry - so much of my life was stripped down to nothing.

"What I've come to rely on are those things God revealed to me before Matthew died; the things he revealed in the light that I now have to live out in the dark."

Focusing on a verse taken from the Gospel of Mark, Kay gave an impassioned talk on the cost of real discipleship and the repercussions of saying "yes" to Jesus, something that has been near to her heart in the months following Matthew's suicide.

She noted that when Jesus says, "Whoever wants to be my disciple must deny themselves, take up their cross, and follow me," he is clearly differentiating between the wider crowds, and those who are truly closest to him.

"Jesus did miracles; he gave sight to the blind, made the paralytic walk and cast out demons. Increasingly large crowds followed him because he had something to offer," Kay shared.

"If we're honest, some of us follow Jesus Christ mostly because of desperate need… A situation in our life - our health or relationships - need a miracle from God. It becomes not so much about what you can offer to him, because of the places in your life that are so miserable and desperate that you need something from Him.

"This is not necessarily a bad thing; something draws us to Jesus, but Jesus looked that day to distinguish the crowd from another group - the disciples," she added.

"The difference between them was profound…If you are a disciple, you will deny yourself, take up your cross, and follow Jesus."

She argued that our inherent selfishness often leads us to value comfort above all else, regardless of the Lord's calling.

"I live and inhabit the Kingdom of Kay," she explained. "I want my way and my will to be done all the time! On most days, our highest goal is to be comfortable.

"We have gotten good at saying 'yes' to ourselves, and saying 'no' to others and to God. But if you're going to move from the crowd to being a disciple, then we have to learn what it means to deny yourself, and become dangerously surrendered. It's about saying 'yes' to God more than you say 'yes' to yourself."

Using her own experience, Kay shared of how we are quick to put boundaries around God, and limit his control over our lives. "We're afraid of what God might do if we surrender," she said, noting that her greatest fear used to be that her family would be harmed, or that she would lose her good health, and she would try to "protect" them from God.

Then she was diagnosed with cancer, and her son took his own life after a life-long battle with mental illness.

"Evil will come because evil will come," she said. "Evil has come into my life, but not because God has punished me for surrendering it all to him. Don't make the mistake of trying to withhold things from God."

Kay then criticized those who "over-spiritualize" the phrase "take up your cross," arguing that Jesus is here asking us to "make a dangerous, courageous surrender."

"Crucifixion happened, and it wasn't uncommon," she noted. "Jesus was talking to real people, telling them that if we are going to be his, step away from the crowds and be a disciple, then somewhere in our hearts has to be a willingness to say "Jesus, if you ask me to die for you and your kingdom, I will do it."

"When we come to accept in the core of who we are that come what may God is good, that he can be trusted, then we realize that he deserves our surrender. He deserves my unqualified yes."

She said we need to be "disturbed" by the evil plaguing our world, in the same way that Jesus was disturbed enough by sin to enter into our mess and die for us.

"The American Dream; the pursuit of health, wealth and happiness, will ruin you, but so will following Jesus! But if I'm going to be ruined, I want it to be for something that lasts; for a Kingdom that cannot be shaken."

Addressing her audience, Kay then declared: "Colossians tells us Jesus was the visible image of the invisible God... You and I, our main task in life, is to make this invisible God visible."

"We don't represent him very well in this world, and so he remains this mysterious invisible deity that people don't get. But when we, by the power of the Holy Spirit, make the invisible God visible, suddenly it begins to make sense.

"I know with absolute certainty that I am called to dangerous surrender: to say 'yes' to God, to be disturbed about the broken world and to be gloriously ruined, and I will spend every day of my life setting the table for men and women and boys and girls to know that there is a God who is passionately in love with them, and who longs to be connected with them in relationship and I do it with these hands, these feet, and this mouth," she concluded.

"If you are not certain of why you're here, if you're a follower of Jesus Christ then you have the privilege, the task and the responsibility of making the invisible God visible, through your life."

"How will the marginalized know God loves them? They won't, until we make him visible," she finished.