Kay Warren: 'We Were in Marital Hell' 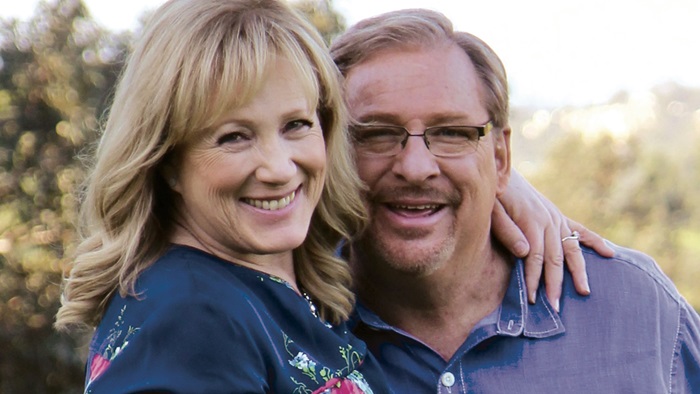 I've always been a church girl. Most of my earliest memories are tied to the people and the small churches my dad pastored in San Diego, California. I remember feeling the pressure to be the perfect pastor’s kid who knew all the right answers to Bible trivia questions. I recall the heavy pressure to be a model for other people and especially the pressure not to embarrass or cause shame to my parents by exposing our family flaws.

Many of my experiences are probably common to others who grew up in a pastor’s home, but a few incidents weren’t related to my dad’s job, and they marked me in ways that have taken me years to overcome. I was molested by the son of the church janitor when I was four or five. I remember not telling my parents because it was “bad” and because as a young child I didn’t have the language to express what had happened.

The deepest place of confusion and internal struggle for me as a teenager was finding pornography at the home of neighbors where I babysat. I was both fascinated and repelled by this forbidden material. It was clearly taboo for a Christian young woman who sincerely wanted to live a pure and holy life for Jesus, but somehow one night I picked it up and looked at it. Instant self-loathing, guilt, and remorse. How can I look at pornography? I love Jesus! I want to be a missionary! I’ll never look at it again, I told myself. And I didn’t. Until the next time I babysat. And the time after that. And the time after that. And before long, I was hooked. The good girl who loved Jesus with all her heart had a secret fascination with pornography, and the shame about killed me. I couldn’t reconcile my temptations and my faith; I was torn apart on the inside. Worst of all, I couldn’t tell anyone about it.

I continued in this state of internal conflict and failure, all the while knowing I was in deep trouble. I wanted out but didn’t have a clue how to change. Then I met Rick Warren when I was 17 at a training to be part of a summer youth evangelism team that would travel to Baptist churches in the cities and towns of California. We reconnected a year later as freshmen at California Baptist College, a small liberal arts college in Riverside, California, and became casual friends.

He asked me out to Farrell’s Ice Cream Parlour in the fall of 1973, and I grudgingly went. A week later—eight days to be precise—he accompanied me to a revival. When we got back to campus, we prayed together to close out the evening. Sitting in the dark, I heard him say, “Will you marry me?” I recall instantly praying and asking the Lord what I should do. I heard God respond, Say yes. I’ll bring the feelings. And so with my 19-year-old understanding of life, romance, God, his will, faith, and my desire to be obedient to him, I said yes. Kay Lewis and Rick Warren got engaged.

Not “the perfect couple”

As I walked down the aisle and stared into the shining eyes of the earnest, kind young man who had asked me to marry him, I knew I was loved. The way he looked at me on our wedding day became an anchor I would hold on to during the darker times when I wasn’t sure we were going to survive the mess our marriage had become.

Our brand-new marriage took an instant nosedive. We didn’t even make it to the end of our two-week honeymoon to British Columbia before we knew our relationship was in serious trouble. We had been warned about five areas of potential conflict all couples have to deal with, and we immediately jumped into all five of them: sex, communication, money, children, and in-laws. We were so young—barely 21—and inexperienced, and when sex didn’t work and we argued about sex, and then argued about our arguments and began to layer resentment on top of resentment, it was a perfect setup for misery and disenchantment.

What made it worse was that everyone considered us the perfect couple. When we returned from the honeymoon, already miserable and shocked at the depth of our unhappiness, we felt like we had nowhere to go with our wretched pain and marital failures. I had told Rick about being molested as a little girl—he was the first person I ever told—but because I was so unemotional about it, he figured it wasn’t that significant an incident to me and basically forgot about it. I kept my occasional ventures into pornography a complete secret. Between the effects of the unaddressed molestation, the resulting brokenness in my sexuality, and the off-and-on pornography fascination, it shouldn’t have been a surprise that sex didn’t work.

The weight of misery

Rick and I managed to limp our way through our first year of marriage, all the while he was a youth pastor to a vibrant group of kids who filled our small apartment at all hours of the day and night. We were young enough and naïve enough—and thoroughly conditioned by our strict upbringing—to not recognize the damage we were causing to ourselves by hiding and pretending everything was okay.

On our second wedding anniversary, we moved for Rick to pursue a master’s degree in theology so that he could become a senior pastor. We still had massive problems with sex, communication, and money, and we were in marital hell. The common understanding of the day was if you love Jesus enough, your marriage will be happy. What was so confusing was that we loved Jesus with all our hearts and were committed to the local church. How could things be so bad?

The fact that we were miserable weighed on both of us like a giant boulder, but we didn’t see any way out. I think we hoped that one morning we would just wake up and find it was all a bad dream and that somehow all our problems would simply vanish. We wanted to honor the sacred wedding vows we had made before God and our loved ones, so divorce wasn’t on our radar. But neither could we visualize living in such pain for the rest of our lives. We just didn’t know what to do or how to create a healthy marriage out of the shattered pieces of conflict, disappointment, dysfunction, and resentment.

Over time, as we both grew as individuals and as we sought counseling together, we began to experience healing in our marriage. Yes, we faced many rough patches over the decades of our marriage, but I’m so glad we stuck it out through our painful first few years. God has worked in our life together—and he’s used our marriage struggles and failures to draw us closer to him and to each other.

Through my decades of ministry, I’ve talked to hundreds of women and couples who were in lonely, unfulfilling marriages—marriages in which their dreams had turned to dust. Where the passion had long since been buried under the daily grind of careers, children, pressure, stress, and unfulfilled longings. Some of these marriages ended with a loud bang as anger and bitterness corroded any sense of decency and humanity and compassion for the other. Some ended with shock, soul-shattering pain, and disillusionment as betrayal made a mockery of the vows of faithfulness. Some ended with a quiet whisper—silence—as boredom, illness, financial struggles, or any other of myriad issues made even dry, brown grass on the other side of the fence look so much greener than the barren wasteland on their side of the fence.

I don’t approach this subject from the Hallmark-card version of marriage but from the blood, sweat, and tears of the trenches where our marriage was forged and is sustained. I know what it’s like to choose to build our relationship; to seek marriage counseling again and again; to allow our small group and our family into the struggle; to determine one more time to say, “Let’s start over” and “Please forgive me, I was wrong” and “I forgive you.” I know what it’s like to admit that my way isn’t the only way to see the world and to try to imagine what it’s like to be on the other side of me; to choose to focus on what is good and right and honorable in my husband instead of what drives me crazy; to turn attraction to another man into attraction to my husband.

I know what it’s like to have vastly opposing opinions on how to handle and cope with a mentally ill child; to have fear and anxiety and panic threaten to swallow up normal life; to become consumed with the needs of one member of the family. I know what it’s like to be cracked open by catastrophic grief and to share it with your spouse when you’re so different; to figure out how to grieve and mourn together when your mentally ill child takes his life in a violent way and your grief is public because you’re in ministry and your glass-house, fishbowl existence is fodder for scrolling headlines on CNN.

We’ve beaten the odds that divorce would be the outcome of our ill-advised union. We’ve weathered my breast cancer and melanoma. We’ve survived the mental illness and suicide of our son Matthew. And now we know. We know we are the best thing that has ever happened to each other. I am in love with the man God brought into my life so many years ago. Each of us is not who the other was looking for, but each of us is who the other desperately needed to become the person we each are today. Yet, it’s also been the very best thing that has ever happened to either of us. We wouldn’t be who we are today without each other. I’m a better Christian, a better woman, a better mother, a better friend, and a better minister because of Rick. He says he’s a better Christian, a better man, a better father, a better friend, and a better minister because of me. The shrieks of iron sharpening iron have often sounded like gears grinding on bare metal, but the result has been profound personal growth in both of us.